Our chicken coop abounds with feathery ladies who believe they would make wonderful mothers…and one who does. The former go through all the motions of the wondermum: retiring to their nest with a martyred look on their little chicken faces, guarding any eggs they manage to stockpile with lightning fast beak-action, and emitting the occasional gusty chicken sigh. Generally this lasts until you utter the fateful words, “How about this year we put some fertilised eggs under insert appropriate name?”  It could be that another coop resident has found a particularly tasty bug, the  gossip at the dust bath was too enthralling, or maybe the scrap bucket made an unscheduled appearance; whatever it is, the nest has been abandoned and Wondermum is doing the equivalent of playing the pokies while the kids wait outside in the car.

Not our Sylvia, though. 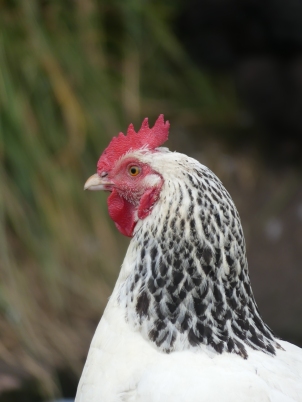 Generally,by the time her chicks peck their way into the world, Sylvia is a shadow of the bird she once was despite our worried, appetite-tempting treats delivered to directly to the nest. And it doesn’t finish there.

Earlier in the year she hatched out three gorgeous chicks. Princess Nikita, our Chicken Sage (as opposed to Sage Chicken which is a whole different deal – and rather delicious), announced from almost day one that, in her learned opinion, one was a rooster and time proved her to be right on the money. But the family unit Mother Sylvia had created was a tight one.  Every morning the little family was waiting, slightly to the side of the throng, for our arrival. At the slightest hint of trouble, mother’s wings would lift to conceal and comfort her three rapidly growing offspring, even when their size meant only their heads were hidden. They continued to sleep together, squeezed into the repurposed Duckingham Palace.

Overtime, we began to wonder about the unnamed rooster, aka Yoko and Zinnia’s brother. Rather than strutting around, his gait was more the bustly trot of his sisters; instead of a creaky-gate, poultry-pre-pubescent screech he was to be found broock-broock-broocking as he went about his chickeny business. Maybe, we allowed ourselves to dream, he is going to be that mythical urban homesteader’s fantasy: a non-crowing rooster.

On Monday, the very air of the coop felt different as we crunched our way down the twinkly-iced path. There was no “family” waiting slightly to the side of the crowd and…hang on; is that Sylvia fighting for standing room at the feeder?? Then as we watched, a collective screech sounded from the flock; feathers flew, ladies blustered, the crowd rapidly dispersed leaving one Mr Rooster centre stage. Strutting across to the compost bin, he clamber in not-quite-a-single-bound (that part needs practice) onto the top bar, puffed out his chest and…

Unfortunately, rulz is rulz and our council frowns on crowing roosters. Alas poor rooster, you had such promise….Sage Chicken, anyone?

14 thoughts on “Nothing to Crow About”