The Farmer came home from his long weekend trainfest a tad sleep deprived, rather weather-beaten, full of stories and clutching something exciting: the all-things-going-according-to-plan next generation of chickens.

Poultry flock management has been a topic of earnest Homestead conversation of late, particularly with a view to introducing some meat birds. While not overly keen on that aspect of it, The Farmer mentioned it to a friend who lives far enough out of town to have a rooster in residence and was happy to provide the fertilized goods.

Now, it won’t surprise our long-time readers that, whilst a great deal of debate had gone into the obtaining of future chickens, not a much thought had been put into the mechanics of the whole thing.  Google, we salute you! We tend to practice an odd combination of googling, discarding the bits that sound a bit tricky, trying to remember what Ma Ingalls would have done in the same situation and then looking at each other and saying, “What’s the worst that can happen.” Though laid out in black and white like this it sounds rather irresponsible, it is a system that has enjoyed a great deal of success to date.

Thus, this morning we introduced the packaged future chickens to our two broodiest birdies, Kiki and Quilla, and lurked with camera in hand. Up to now,these ladies have been diligently, and with not a little dollop of beady-eyed competition, incubating three plastic eggs between them in one nesting box. Though little,they have the lightening strike of a puff adder on a bad day, so the operation was undertaken with cautious fingers and leg muscles coiled for a quick getaway and half way through, the goats got wind of things happening that weren’t connected with getting their breakfast. I say this by way of explanation for the shocking camera operating (holding a cell phone up to chicken netting whilst scooping chaff for hungry bleating goats: there have been Oscars awarded for less!).

Seven hours on, both ladies are sitting pretty while steadfastly ignoring each other, with not a hint of pearly-shelled ova peeking from under their feathery skirts. Of course, there is still many treacherous bends to undertake on this latest journey, not least that the nesting box is about a metre off the ground when/if hatching time arrives, but  so far so good, and we’re not counting our…well, you get the picture. 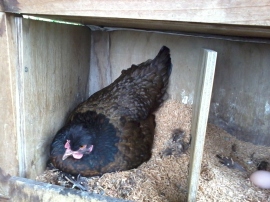 Typically, when the photographer went to record the evidence, Kiki was stretching her legs.

13 thoughts on “We’re Not Counting”