We’ve been a bit off lately. Life is busy, we’re tired, having a school teacher in the mix has ensured we’ve all been down with the obligatory start-of-the-school-year bug, and we’ve had a series of less-than-lovely experiences. Yes, it’s going to be one of those posts; set the co-ordinates for Self Pity Central and hit hyperdrive, we’re gonna wallow.

The recent seismic activity has resulted in our resident Rodent Catcher, Mr Dave Cat, disappearing. We are not alone in missing four legged family members after the recent ‘quake activity, but we’re selfishly feeling very sad. On the positive side, it has been wonderful to hear, as we door-knock and put up flyers and the like, of his antics and liaisons around the neighbourhood with the local felines and their families who all join us in trusting he’ll saunter back into our lives and our living room very soon.

Because, as a group, we’re a trusting bunch. In turn, we like to think the world is full of nice folk we can trust. Folk who, like us, would return, intact, the wallets that regularly plummet out of carousing weekend bus travellers pockets and into our spinach bed, or hand the keys dangling in the car door into the supermarket help desk.  It’s just what you do, after all haven’t we all had days like that?

Unfortunately, recently the Homestead was dealt a glancing blow by a bunch of folk whom don’t subscribe to our way of thinking. Instead, when they spotted The Renovator’s bike, locked up in the cycle compound at work, they felt it was okay to smash the lock and take it as theirs. We know this because the school’s security cameras saw it all: the three of them nonchalantly strolling in, demolishing the lock, and taking something we’d saved for and picked out and prized because it was exactly what he’d wanted!

But just to prove nothing is ever all bad, the more hardy mountain bike the school is loaning him has allowed him to  shave five or so minutes and the death-defying Bridge Street roundabout off his journey with its ability to negotiate the sometimes rudimentary river cycleway. There you go: silver lining number one!

Trust in our fellow man took a further dent over the sale of one of the Homestead fleet. Our trusty Serena van has a good many miles left in it.  Whilst not a vehicle of beauty, speed or performance, we are all very fond of this trusty means of conveyance for what have been some of our best adventures but it is really surplus to requirements. It has been parked outside the Homestead with a home-made sign in the window and the other day a gentleman expressed interest, named a price, we haggled a bit, and it ended with a hand shake and a promise to return with the dollars that evening. Except he didn’t; come back, that is. Now, everyone we’ve shared this story with to date has assumed that we actually gave the guy our van without receiving any payment which has had us questioning just how the world views us. Trusting we may be, but we’re not stupid! But what a bummer that someone who shook our hand in a trustworthy fashion turned out to be the exact opposite.

In the spirit of silver linings, we’re glad. He didn’t deserve the solid, well-serviced, reliable, personable ride that is Miss Family Conveyor 1997.

Oh, and remember the appointment we made to update our wills and generally do all that sort of unpleasant paperwork you sometimes just have to do? Some of us took annual leave, we gritted our teeth and ventured to the   *ahem* other side of town for the appointment for which we had prepared all the paperwork (this used to be The Bean Counter’s area of expertise). The meeting, scheduled to take one and half hours, was done and dusted in twenty minutes because, well, The Bean Counter knows his stuff, and we were sent of with a cheery, “We’ll be in touch once the documents are prepared, within five to ten days, to have them signed and witnessed.”  After four weeks, a series of polite email prompts and a couple of telephone calls it was determined that the service for which we are required to stump up more than the asking price of an absolute gem of a 1997 Nissan Serena had “stalled”.  We don’t tolerate that kind of mechanical failing in our vehicles, why would we allow it in one charged with drawing up our legal papers? Public Trust: you’re fired! We Homesteaders are getting very D.I.Y savvy.

And we’re up a couple of thousand dollars – silver lining number three.

Oh, there’s been other blots on the landscape: Farm Girl’s schooling situation is still in No Man’s Land, our land line was rendered a cracklefest by a summer downpour that initially didn’t meet the stipulated “fault” criteria (despite our call having to be abandoned and resumed on a cell phone), and off-Homestead empathetic listening seems to have been decidedly thin on the ground but talking to you good folk has cheered us right up whilst reminding us of a few more silver linings.

yes, we’re still waiting for the plumber to finish up but, hey! we love it!

and the joy that comes from learning new stuff together without having to do the whole school drop off/pick up malarkey.

The human body is a marvel!

And best of all, a new addition to our extended family across the ditch in Sydney. 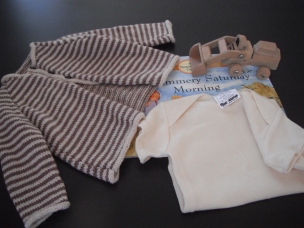 Congratulations, hugs and lots of love to the Jays and the Gees and the Vans, too. Nothing beats another twig on the family tree for driving those black clouds away and reminding us of what’s really important in life.