It was the turn of The Farmer and the Princess to play Sage this week but due to their hectic social calendar (they actually have a life 🙂 ) it took the form of a dessert celebration. There were no complaints here.

The choice of comestible has echoes in the past – way back to our first sojourn to the City of Angels when The Farmer was five. It was on this trip he first sampled a chocolate cream pie; For him, it was life changing. Over the intervening years many many pies have been devoured in an attempt to sample once again that creamy, sweet, decadent treat without success. They were always too grainy, too sweet, too perfumed, too soggy, too jelly, too…well, you get the picture. So it will come as no surprised that, very near the top of his list, on our return to California, was penciled the desire to Find that Pie Place! 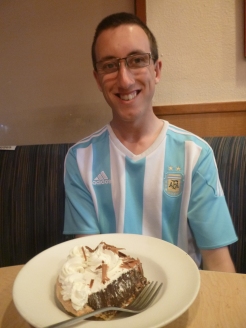 We didn’t find the exact pie place, but Cocos Bakery Restaurant managed the seemingly impossible and delivered a pie that was deemed *gasp* even better than the original. Many tastings were conducted, ideas were mooted, textures explored… 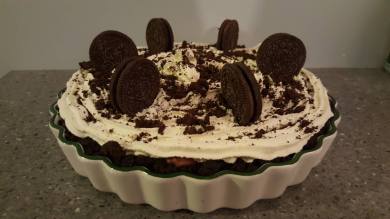 We knew, with their powers combined, Cocos Chocolate Cream Pie recreation was only a matter of time; Princess Nikita and The Farmer are a formidable force.

To accompany their pie triumph (as it certainly was) were some pretty deep and meaningful words.

Lively discussion ensued. Our resident engineer very kindly overlooked the use of her occupation label to describe a train driver (a great concession considering this can usually be depended on to elevate her blood pressure) in deference to the memory of the magnificent Corrie ten Boom.

But what did the words mean?

Was it a nod to a power greater than us? The sentiment that all adventures have a rough patch and perseverance is the key? The belief that everything happens for a reason? In a family of free-thinkers, interpretations were numerous, diverse, and loudly proclaimed.

The Farmer, literal to the end and not a great fan of controversy, ensured the party ended on a high by declaiming a sage thought to accompany his innocently chosen words. To disembark a locomotive whilst in motion, at any time, is foolhardy, to do so in a dark tunnel is utter madness whether you retain your ticket or not.

Sometimes you just need to be reminded to shut up and enjoy your pie.

14 thoughts on “Sage Words -Shut Up and Eat Your Pie.”