Despite our best efforts, and largely because of our refusal to buy into the practice of ticket touting (we actually saw the cliched man in a ticket-filled large coat; “wanna-see-the-game?”), Liverpool gameday dawned without hope of us being inside the stands. After spending some time watching those more lucky than us skip past our window we decided to stop our pouting and join the fun. 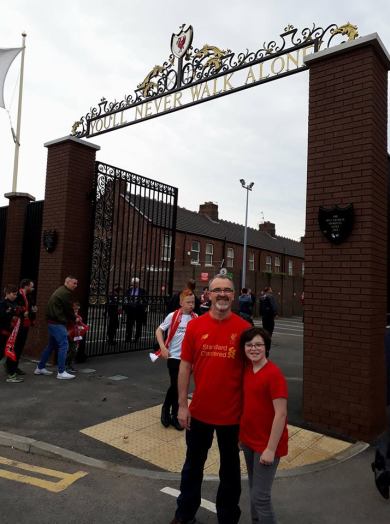 Half a kilometre down the road it was carnival atmosphere. A band was playing, Mighty Red was posing with his fans, a yellow submarine was churning out fish and chips for the crowd (we were in Liverpool afterall) and the mood was merry in a way that could only be termed family friendly. 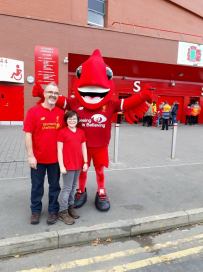 We lined up with the throng to watch the unmarked, unremarkable opposition bus arrive to a few half hearted “boos” and one man, to our utter delight, hurling the term “gobshite” around; It doesn’t even sound like swearing to our antipodean ears. We cheered Jurgen and the boys in their anything but discrete mode of transport; It’s all about making a statement, afterall. 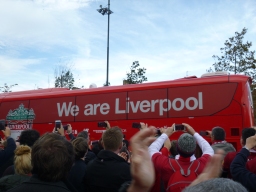 Then, suddenly the crowd thinned until there was just a handful of forlorn foreigners staring teary-eyed at the back of The Kop as that famous Gerry and the Pacemakers opening rift  sounded…and it stopped being fun. So, back to our accommodation we trotted and, after briefing Farm Girl on what she may or may not be witness to, we edged ourselves into a corner of the bar and watched what turned out to be a frustrating game…most of the time.

As for our fearing for Farm Girl’s tender years, there was no need. It was all good clean fun, and when frustrations boiled over it was done with humour rather than anger. We’re not naive enough to think it is always like this as the strong security and police presence (plus the fact that all light furniture is securely locked in the pubs basement on gameday) proves, but for us it was a great day which we finished with a wander around the block and a visit to the kebab shop.

And through it all, the man directly across the road from our accommodation spent his Saturday re-pointing his house brickwork which brought to mind a time, long time ago, when pushing the toddler Farmer in his buggy down the main street in Rotorua I was asked for directions to a local park famous for its free access to the thermal activity. The American couple thanked me profusely then pointed to the steaming gutter and asked, “How does this become normal?” We could have asked that man the same thing.

14 thoughts on “Walking On”