It’s a kind of standing joke: calling this place a farm.

“How’s things down on the farm?”  “How did the farm fare in last night’s gale?”  “I’ll pop into the farm for a coffee on my way past.”

Peaceful on the “Farm”

Us Homesteaders, however, are very aware that this place is as much a farm as the Homestead Mobile is a Ferrari. Firstly, we’ve got very limited space, a fact playing quite heavily on our minds after the article in this month’s New Zealand Lifestyle Block magazine on barber pole worm  and it’s effect on goats. Not that Nessie and Leia are exhibiting even the hint of being anything other than hugely content, but forewarned is forearmed and thus finding a devilishly clever way to divvy up the paddock  to allow for rotational grazing has just been fast tracked up The List.  Other factors distinguishing this place from a farm include us being situated on a major bus route, five minutes bike ride (three if you really push it) from a suburban shopping centre, getting our rubbish and recycling collected at the gate, the absence of a septic tank and (something that causes The Farmer great anguish) no ATV in the garage.  But the one resounding point that separates this place from a farm is our faint hearts when dealing with our animals.  This is something we are aware, to the point of being embarrassed, of. 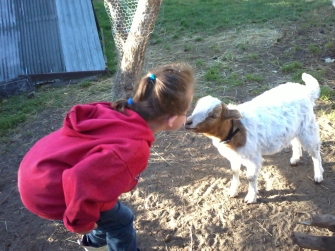 Example number one:  We wanted three  ducks for egg production. Through a series of trial and error, documented in Early Days at Duckingham Palace, we somehow ended up with four ducks, which has since revealed itself to be three ducks and Ed.  As Ed (the drake formally known as Edna) is now old enough to pose a challenge for the big boy drakes on the real farm, returning him now would in all probability result in his demise. What to do?  Let’s be blunt: on a farm, Ed would have featured on the menu by now.  Here he is running with the girls, having a wonderful time and looking utterly gorgeous. To save face because of our “no passengers on the Homestead” stance, talk will often turn to grandiose duck raising projects but we all know this has the huge potential of upping the number of fare-dodgers on the  Homestead bus even more.

Ed and the Girls

Example number two: Nessie.  Fun, ingenious and  the undoubted paddock matriach, she has fallen a tad short of the duties specified in her job description: she ain’t built for milking.  Here we are, teetering on the brink of doing what any self respecting, level headed, clear thinking farm folk would have done long ago, ie: returning Nessie to the proper farm, and it’s tearing us apart.  And why?  Logic tells us that she will be suitably fed, housed and cared for on the real farm, her hooves will be trimmed and any arising ailments dealt with accordingly.  Oh, but who will take the time scratch her neck in that place she loves?  Who will ensure she gets her share of the feed bucket? 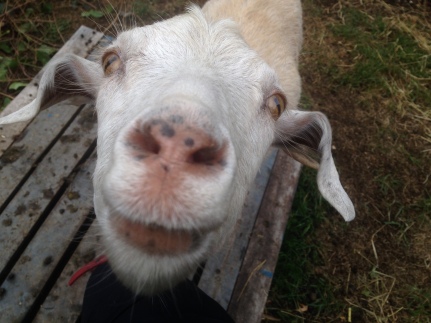 Standing in the wings, awaiting Nessie’s exit stage right, is the most gorgeous purebred Saanan goat you are ever likely to clap eyes on.  Currently pregnant (she had triplets last time), with an udder like a moon hopper (did we really just say that?!), Geraldine was put on this earth to produce milk for Homesteaders like us and we are utterly thankful that Boss and The Glamour Hippie would consider bestowing her on us.  Sorry, Ness, but your days on the Homestead are numbered. 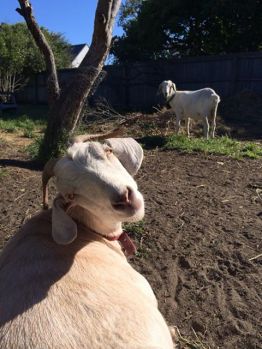 All that aside, it’s been a full on week.  Work has finally finished on the realignment of the feijoa garden allowing for easier washing line access, a project necessitated by the Milk Maid’s series of undignified topplings whilst either hanging out or collecting the laundry (most notably into the midst of the carefully tended swede seedlings).

We’ve had our yearly visit from Ken the chimney sweep who never fails to congratulate us on our choice of woodburner.  The firebricks have been inspected, the door no longer squeaks and this visit he even showed The Goat Herd how to fine tune the draught control for optimum heat to firewood ratio as he deduced from the soot formations that it was burning too hot.  Abel and Prestige Chimney Cleaning Ltd: the epitome of old fashioned service.

Also on Homestead this week, we’ve had the floor sanding boys who have once again worked their magic.  That’s bedroom number three finished; one more to go.  Thanks to Grant Sutherland Floor Sanding for managing to squeeze us in despite an eight week waiting list and for being so personable in the process (the startled look as they came to say goodbye during milking time was priceless!). 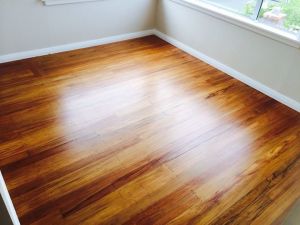 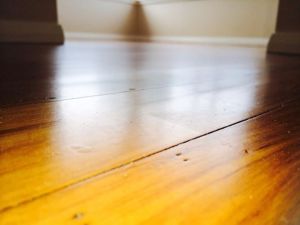 Thanks to Grant Sutherland Floor Sanding

There’s also been a good dollop of wholesome community fun (not at all as cringeworthy as it sounds) this week.   Last Friday night was Beatles Night at the New Brighton Ukulele Jam, in honour of Windsok’s impending departure for Base Camp to teach Tibetan teachers (we think we got that right). Nothing like yodelling along to Hey Jude or Come Together, or listening in awe to Graham Wardrop’s rendition of Here Comes the Sun, to round off the week in style. Not pointing fingers or anything, but the Milk Maid had no voice left on Saturday morning and only one person was brave enough to celebrate this.

There was also the Potato Festival to visit on Saturday afternoon.  Potato printing, an Irish band, Smack the Spud and Farm Girl won a box of gourmet potatoes in the treasure hunt!  Actually, the treasure hunt was an utter success for the Homestead as, while searching for clues, we discovered an extremely unruly ivy hedge just begging to be turned into goat fodder.  That’s win-win in a nutshell.

Nessie and Leia Enjoy Some Ivy

The question is whether the ivy harvest happens before or after Nessie’s departure.   Just quietly, our money’s on before. 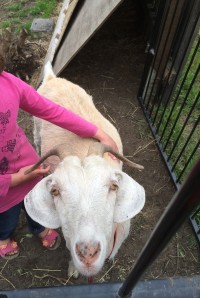 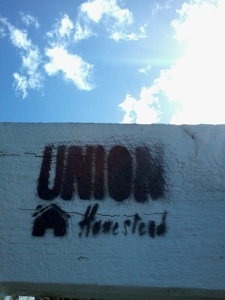