What makes a good neighbour?

Before we moved to this amazing suburb, we would have answered that with a flicked off comment along the lines of: people that keep themselves to themselves.

We would have been wrong.

But, as usual for us, here we go again starting right smack-bang in the middle of a story so allow us to take a moment to compose ourselves; deep breath; correlate thoughts; okay, here goes…

Firstly, we need to report on Farm Girl’s tooth situation as we very remissly left this earth shattering news off our last missive, resulting in a stern telling off for your humble scribe and one or twelve evidential selfies for inclusion in this weeks edition. 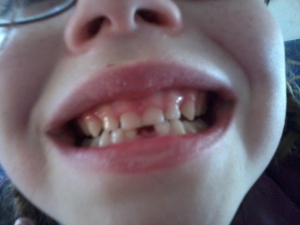 No, it’s not one of those stories with a twist in the tale; the wiggly tooth did what these things do and got wigglier and wigglier, eventually breaking contact with it’s moorings as Farm Girl sat amongst her peers enjoyed another installment of the story, Best Mate. The Kingdom of Nova is well practiced in the art of handling such situations and thus Farm Girl and tooth arrived home together, none the worse for wear, and the tooth-fairy was free to go about her business.  Are we the only ones who find the idea of this sprite utilising children’s teeth as a building material slightly revolting?  But that’s a topic for another day.

Anyway, to mark such a momentous happening in the youngest Homesteader’s life we had a bit of a wander around YouTube, like you do, and stumbled upon Farmer Derek Klingenberg. Via trombone serenaded cattle (incidentally to Kiwi diva, Lorde’s, Royals) and a great Frozen parody, we found a song that spoke directly to her; in fact it mentioned her by name: all the Farm Girls  in this Happy parody are invited to dance around if you like playing in the dirt.

So inspired was our particular Farm Girl that the meadow is now rendered a moonscape by her green shovel-aided dirt playing sessions, from which regular rest sessions are spent perfecting her unparallel bar routines (a slightly less than perfect attempt resulted in four more wiggly teeth) and checking out what’s happening at Ezekiel Tigerlily’s place.

Farm Girl digging in the dirt for an appreciative audience with gymnastic apparatus in the background.

What makes a good neighbour # 1:  Pre-teen curiosity is greeted with a smile rather than seen as an invasion of privacy.

As Geraldine continued to expand this week, The Milk Maid and Goat Herd became the butt of a few barbs concerning their lack of ability in forecasting the happy event.  One in particular hit a raw nerve.  The resultant rehash and chew-over as morning chores were undertaken resulted in a summonsing to the opposite fence-line by  Jude Nextdoor who dismissed the claims with a snort, bouyed up flagging self belief, and reassured us things always happen when they’re ready.

What makes a good neighbour #2:  They understand the benefits of a well timed compliment far outweighs the risk of being branded nosy.

All spare moments this week have been spent clearing the paddock of potential firewood, stockpiled from gleaned tree fellings, prunings and blustery weather damage.  We figured it was best to work near the Maternity Ward, you know: just in case, but Thursday was always earmarked Road Trip Day.  Leaking gumboots, the need to up-end yourself to get the feed out of the barrels, and key projects stalled by the absence of  crucial components rendered all arguments futile; a trip to the Dark Side *ahem* OTHER side (of town) was required. Think Beverley Hillbillies, swap the truck for a bedraggled, hay encrusted, elderly Nissan Serena and you’ve got a pretty fair idea of proceedings.  The Other Side is busy, people are impatient, there’s lots a rush and bustle and not a lot of smiling. Our stumble down the road trip list was swiftly halted by a phone call from The Bean Counter.  Mrs Ezekiel Tigerlily had looked over her back fence, beckoned by noises that resonate with mothers of all species the world over, to see Geraldine’s happy event was underway with no Homesteader in situ and the Homestead empty.  From one of those over the fence chatters, the location of The Bean Counter’s off Homestead employment was recollected and an advisory phone call made.

What makes a good neighbour #3: When they look over the fence to encounter your goat in labour, they care enough to take a punt and contact you because they know you’d want to be there.

Welcome to our world Ruby (front) and Otis. Mother and kids well.

So, with the birthing ballyhoo over and the celebratory Indian takeaway decided,  we settled for a pre dinner, post palaver cuppa when there’s a knock at the door.  It’s Sharon Frontflat clutching a heaping bag of one of the Homestead’s ultimate treat foods: mushrooms.  Life had smiled on her in the form of an overabundance of the delectable fungi like it does sometimes.

What makes a good neighbour #4: Sharing the unexpected booty that life sometimes deals you up.

This week on the Homestead we’re feeling pretty flush, both in happy events and in people to share our space.  Hope that the universe is smiling as brightly on you, whether you’re next  door, across town, cross country or transcontinental.

In closing, please excuse us as we blatantly overindulge in a montage of our newest, cutest Homesteaders.  Promise we’ll be back to our level headedish, normalish selves again next week.