Despite reading screeds in the media about a myriad of projects designed to lure honey bees back into post-quake Christchurch, we had found it nigh-on impossible, even via the local bee keepers association, to access replacement residents for our top bar hive. The two leads we did get ended in disappointment and we had all but given up hope of seeing the garden abuzz this season.  Then, wandering around the net one morning in the way of a person on two weeks leave with no particular place to go, The Bean Counter happened upon a website:

Contact was made, diaries consulted and an adventure was hatched; Time for A Bee Road (trip) with apologies to the Beatles :),  A Magical Mystery Tour, if you please…

This was to be our third-time-lucky attempt at beekeeping, a  longtime dream The Bean Counter originally voiced back when the very hint of the possibility of the Homestead was but a sparkle in the eyes of two starry eyed kids (one sporting a mullet, but that’s a story for another day).  Our first effort fell victim to two snowfalls in one season and the ignorance of enthusiastic beginners, and the second to whatever wiped out the majority of Christchurch hives after the February 2011 earthquake.    Filled with resolve, excitement and a little bit of fear that maybe it would end in dismal failure yet again, The Bean Counter and The Milk Maid prepared to hit The Long and Winding Road.

The New Zealand Bee Company is situated just outside Nelson so, after much discussion, a circular route was plotted. 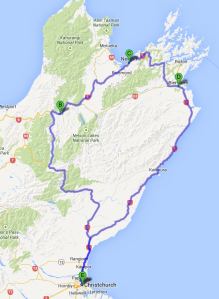 Christchurch to Nelson via the Lewis Pass and return via Blenheim and Kaikoura, a return trip of 870 km

The proposed day arrived.  Farm Girl happily dispatched to the kingdom of Nova, goats milked, poultry fed, and morning coffee consumed, The Renovator, Farmer and Goat Herd waved off the intrepid explorers.  Their instructions were succinct:  keep in regular text contact, advise of route deviations, and take the obligatory photographs as per any self respecting Daytripper (apparently), ie: every morsel of food ingested, a pretrip selfie, and one of an arm outside the car window. 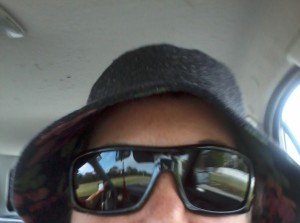 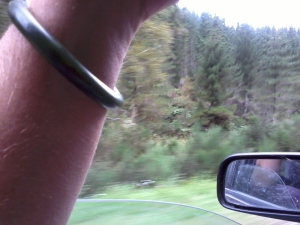 Although not totally sure of the photo requirements, we figured, “We Can Work It Out.”

As we left State Highway One in the beloved Homestead Mobile and the real journey began, talk turned to the sizable carbon footprint our trip was incurring.  Deciding we couldn’t, in all honesty and integrity, divide the eco-impact of our trip by the two of us plus our prospective bee passengers (estimated to be around 2500), we spent the next fifty or so kilometers thrashing out (read: justifying) the whys and wherefores.  On the plus side: our vehicle is well maintained, energy efficient, and travelling light, we are collecting bees, an insect the world in general and our city in particular desperately needs to encourage, and the resultant honey (because this time it WAS going to work) would set the Homestead up for entire year, negating the need for each jar of honey we would end up buying making a similar trip (if you squint, it makes sense).  On the other hand, an aged, petrol driven vehicle trundling two people 900 odd kilometers.  Ummm…  Somehow, it was decided that if we fueled the human component of the expedition on comestibles produced locally, the resulting small boost to the local economy would go some tiny way to making up for our selfishness.  It would also be rather yummy. 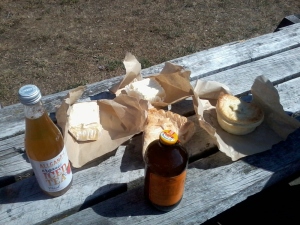 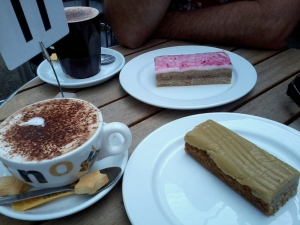 Thus, lunch was purchased at The Culverden Bakery, home of the custard square, where all food is baked on the premises.  Okay, we realise that a Bundaberg gingerbeer is pushing it a bit, especially in view of this past weeks Aussie supermarket cleansing, but there was no kiwi alternative at this establishment.  We ate at a well worn picnic table in the bright sunshine and smiled about the fancy, modern facade on the Four Square Supermarket when a glance down the side of the building showed that it was anything but that.

Then it was back on the road.  It’s a Long, Long, Long drive through the Lewis Pass to Murchison, through terrain which  beautiful in a rugged, alpine kind of way way.  We stopped at the Maruia Falls (because we are suckers for waterfalls) to stretch our legs  and justify an afternoon tea stop at The Murchison Tea Rooms: homemade slices of the size and style of yesteryear and Cafe La’affare coffee – highly recommended. 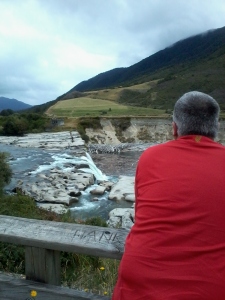 Nelson is funky, cool, and a tourist mecca with a wonderful climate.  We arrived with just enough time to drop in on an as yet unvisited branch of our favourite New Zealand eatery chain, The Lone Star Cafe where we dallied a little too long over our Johnny Cash Stash (try it, it’s sublime) and burnt off all the calories we’d uploaded on the entire trip in one undignified dash through the crowded streets, to the Homestead Mobile, and on to carry out the business for which this trip was originally planned.

Glen of The New Zealand Bee Company was too polite to mention we were a tad late and we were too preoccupied with the logistics of what we were about to undertake to remember our manners.  Belated apologies to Glen, who supplied  unambiguous directions to his gorgeous slice of paradise, sensible pointers on how to ensure the bees remained in their temporary hive, professional advise on what we were about to undertake and what had gone wrong in the past,and even the offer of a cuppa and use of his “facilities”. He also offers a Hire a Hive scheme for those not keen on doing the whole beekeeper thing too.  Check him out at http://www.hireahive.co.nz.  We at the Homestead, including the newest residents, thoroughly recommend him.  If you’re keen to produce your own Honey, Don’t go anywhere else (see what we did there?). 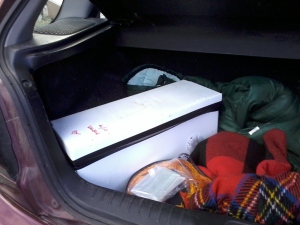 It was a sedate drive through to Blenheim, where we had one more coffee (and a slice of cake but don’t tell anyone) and the incredibly funky Ritual Cafe, checked on our passengers who were apparently happy and happily still contained, and ambled off homewards via Kaikoura and good old State Highway One.  As the moon came up we tucked in behind a truck whose driver was offay with the roads and arrived back at the Homestead just after midnight where all except Farm Girl (who had left a couple of welcome home cards and a decorated living room) stumbled out of their beds to hear of our Hard Days Night adventure.

The following day, the bees were released into their new home. 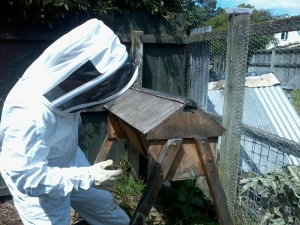 Judging by the way they flew, Helter Skelter, throughout our garden, they Feel Fine. 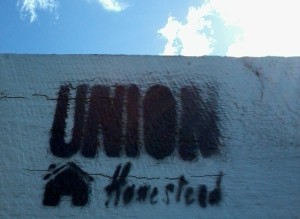